Glen’s story began when he was diagnosed with leukaemia on 10th June 2009. He was 6 years old. Glen was sent to St Georges Hospital in Tooting and he started treatment on the 17th June. Three weeks later, further tests showed that he had philadelphia leukaemia and would need to undergo a more intense series of chemotheraphy. He was transferred to the Royal Marsden Hospital in Sutton when a bed became available.

Over the next months Glen had blocks of intense chemo and he responded well. Glen’s time in hospital was positive and he coped well. This gave his family a sense of strength and hope for the future.

As Glen’s body had responded so well to the treatment the family were told that he would be able to have a bone marrow transplant. So their next mission was to find a suitable donor. After tests, the family had the good news that Glen’s only sibling, Adam who was 9 years old, was a good match as a donor. This was fabulous news for them all.

The rest of the year was spent making trips back to the hospital for treatment. Glen was at home and continued his medication. He had a home tutor to try to keep life as normal as possible.

Later a date was set for January 2010 for Glen and Adam to undergo the bone marrow transplant. A month before Glen had radiotheraphy to prepare his body for transplant. He was very tired but he coped well and his family were extremely proud of him.

Finally the day arrived for his transplant, 7th January 2010. It all went according to plan. The recovery period for Adam was 3 days and Glen had to stay in isolation at the Marsden for 5 weeks.

During this time the only people who could have contact with Glen were his parents and the medical staff. Once he was able enough, the teachers at the hospital were able to stimulate him and help him get back on track. 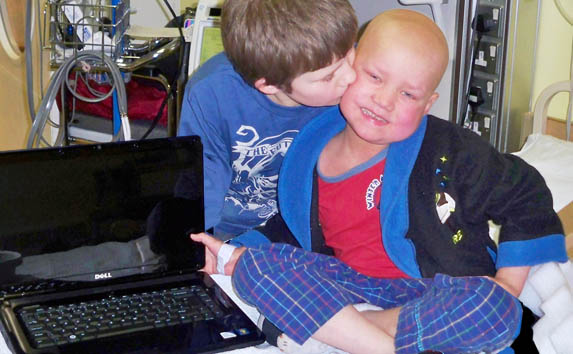 At this time Glen had expressed a wish to have his own laptop. This would help to get him motivated and learning again as well as being able to communicate with family and friends whilst in isolation.

The CLIC Sargent team, based at the Marsden, contacted us to see if we could help.

We were delighted to purchase Glen a laptop so that he would be able to communicate, learn and fill some of the many long hours on the ward. Glen was over the moon.

When Glen’s isolation period ended he was then able to mix with others and attend the ward school and use the playroom. A few weeks later he was discharged. He had a home tutor and went back to hospital for regular checkups. Glen was doing really well.

In July he attended his school for half days. During the summer Glen was able to mix more and go swimming. He returned to school in September and was monitored by the hospital and was doing well.

Charley Paige Trust has kept in touch with Glen’s family and we were delighted to have them as special guests at our Charley’s Smile Fun Day in June 2011. 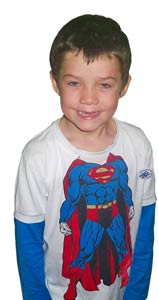 ” I will never forget the day when Glen was handed his laptop. He wasn’t a very happy boy and receiving the laptop made him smile and very happy. I will always have that memory forever “

Our aim: To enhance a sick child’s life and/or support their family and make smiles happen. We certainly made smiles happen that day.

Charley Paige Trust would like to thank Glen and his family for allowing us to use this story. Photos supplied by the family. This is a story about two brothers with a very, very special bond.

NB. We do not identify families or personal identities without their express permissions.