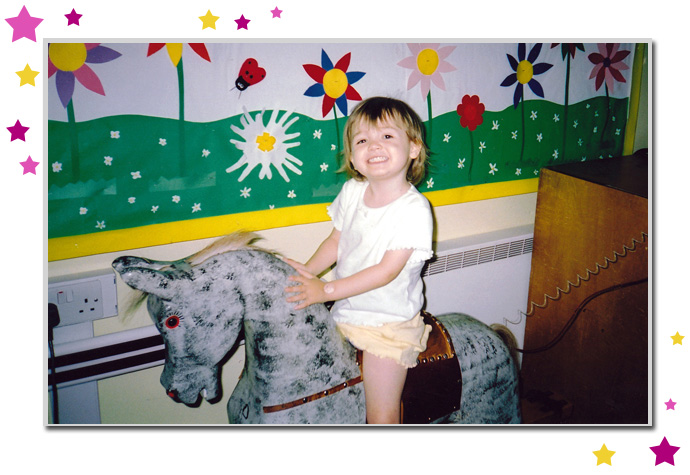 Charley was born on the evening of 24th May 2001. We were delighted, as she was our second grandaughter. She was a lovely baby and had a placid nature. By the time she had her 1st birthday she had developed into a cute little girl, doing everything she should be, walking, saying a few words and keeping her mummy and daddy on their toes.

At about 16 months Charley became unwell, she had infection after infection and she became very tired and peeky. She was taken to the doctors on many occasions but no doctor seemed to be alarmed at the fact that she had been continually unwell for more than a month. Then her parents insisted that she had further tests. She was sent for a chest x-ray and blood tests. Within 2 hours of having the blood tests they were called back to the surgery and were told that she had leukaemia, and they were sent straight to St. Peters Hospital in Chertsey, Surrey.

On the 14th November 2002 Charley started 4 months of intense chemotherapy on the children’s unit at the Royal Marsden Hospital in Sutton, Surrey. She coped very well, much better than us adults looking on. She had good and bad days.

In March 2003 she was ready to come home. She was in remission and things were looking good for her. She had her second birthday in May and although she was still getting tired easily, she enjoyed her party. On the 16th June, she had her Hickman line removed. (This was a line that went directly into her heart and is used to give the chemotherapy and is left in for a while after treatment). We hoped this would mark the end of her treatment, and we were all happy that Charley was on the road to recovery. 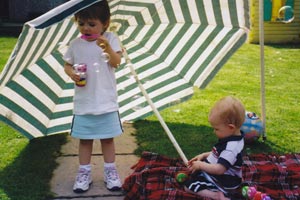 On the 17th June 2003 her baby brother Layton was born, Charley was chuffed and very proud.

In August Charley became unwell again and after 3 trips to the doctors, she was diagnosed with dilated cardiomyopathy. The chemotherapy treatment had damaged her heart and she needed urgent treatment. It is very rare for this to happen so severely. At first, she seemed to respond well and was about to come home from the hospital when she went downhill again. They increased the treatment and she was sent to see a specialist at another hospital. Her parents were told that if the treatment didn’t work she would need a heart transplant. By now we couldn’t believe what was happening, had she not been through enough. She was sent to the cardiac wing at Great Ormond Street Hospital, where they stabilised her and got her back home but she was put on the transplant list. She had lots of medicines to take, and they were juggled around from time to time, depending on how she was. She never made a fuss, she took her medicines and never complained.

Because of her heart condition, she was not able to run around like other children of her age but spent a lot of her time watching Disney videos. She learnt them word for word and could sing all the songs. She had good days and bad, but very rarely was miserable.

Time went on and Christmas came and went. From time to time Charley would spend a bit of time in hospital with chest infections or having her medication adjusted.

She had her 3rd birthday in May 2004. Her parents took her to the Zoo and she had a little party with her brother, cousin and family.

On the 14th June 2004 Charley went for a routine check up for her heart. She had blood tests and heart scan etc., The next day they had a call to say that Charley needed to go to hospital for a blood transfusion. They were told that her blood results were not normal.

On 17th June (her brother’s 1st birthday) they were told that Charley had relapsed. Our worst nightmare was happening for real. We were numb.

They had meetings with the leukaemia team and cardiac team, and in short, because of Charley’s heart condition, she would probably not survive the treatment again for the leukaemia. They would be able to keep her as comfortable as possible by giving her blood as she needed it, but she would not be with us at Christmas. Her parents bravely chose not to give anymore treatment. (everyone felt that this was the best for Charley).

During the next week Charley had a couple of blood transfusions and on the Wednesday of the following week they all went to the Chase Children’s Hospice, in Guildford, for Charley to get to know the staff and surroundings and for a couple of days break, as the facilities there are fantastic.

Unexpectedly, she deteriorated on the Thursday, and sadly passed away on Friday, 2nd July 2004, just two weeks after she had relapsed.